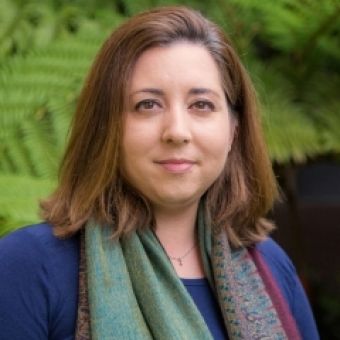 On February 18th the White House announced that the ICB’s Michelle O’Malley was among 105 recipients of the 2016 Presidential Early Career Award for Scientists and Engineers (PECASE). The PECASE award is the highest honor bestowed by the United States Government on science and engineering professionals in the early stages of their independent research careers.

For O’Malley, Assistant Professor of Chemical Engineering at UCSB, the PECASE award is the latest in a series of honors—she received the Department of Energy Early Career Award in 2013; the Hellman Faculty Fellowship in 2014; was recognized as one of MIT’s Technology Review’s 35 Innovators under 35 in 2015; and received the NSF CAREER Award in 2016.

“I am so grateful to the Department of Energy for nominating me for the PECASE, and for recognizing the potential that our research has to contribute to sustainable energy,” said O’Malley. “I am astounded that I was selected for the award, and I can’t wait to meet the President with the other awardees this spring.”

O’Malley’s research, recently published in Science and profiled on BBC News focuses on the biotech potential of microbes, which may have significant applications in the realms of renewable energy and advanced chemicals. Her most recent work investigates the functions of relatively little-understood anaerobic gut fungi—a primitive microbe found mainly in large herbivores—whose unique functions and enzymes may offer new sources of biofuels and methods of producing next-generation pharmaceuticals.

“I am delighted to congratulate Professor Michelle O’Malley on this very meaningful and high-profile award,” said UC Santa Barbara Chancellor Henry T. Yang. “The Presidential Early Career Award for Scientists and Engineers is highly competitive and recognizes not only the excellence and significance of Professor O’Malley’s research contributions but also her potential for future leadership and research impact. It is especially exciting that this honor follows so closely on her selection for an NSF CAREER Award just last month.”

Awardees are selected for their “pursuit of innovative research at the frontiers of science and technology and their commitment to community service as demonstrated through scientific leadership, public education or community outreach,” according to a White House release. The awards will be presented at a White House ceremony and each recipient will receive up to five years of federal research funding.

“These early-career scientists are leading the way in our efforts to confront and understand challenges from climate change to our health and wellness,” President Obama said. “We congratulate these accomplished individuals and encourage them to continue to serve as an example of the incredible promise and ingenuity of the American people.”