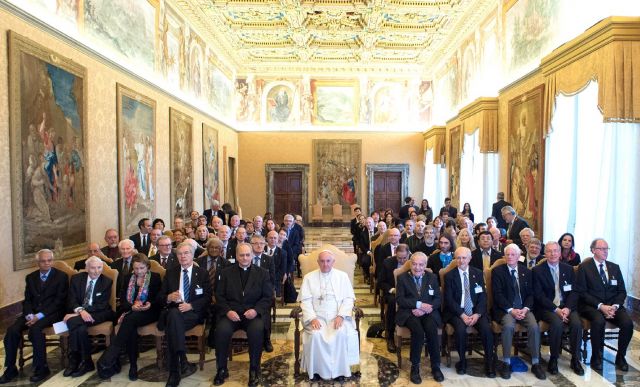 Pope Francis poses during an audience with participants attending a plenary session of the Pontifical Academy of Sciences at the Vatican. CNS photo: L'Osservatore Romano.

Frances Arnold, ICB project leader, Linus Pauling Professor of Chemical Engineering, Bioengineering and Biochemistry at Caltech, has been named to the Pontifical Academy of Sciences, a scientific academy under the auspices of the pope and based in Vatican City. The announcement was made by the Vatican on October 24, 2019.

As a member of the pontifical academy, Arnold will have the opportunity to attend academy meetings, participate in study groups focused on scientific issues and contribute to published academy papers.

Arnold was the co-recipient of the 2018 Nobel Prize in Chemistry for pioneering use of the directed evolution of enzymes. The results of her work include more environmentally friendly methods for manufacturing chemical substances, such as pharmaceuticals, and the production of renewable fuels.

Arnold and her colleagues have used directed evolution to persuade bacteria to make chemicals not found in nature, including molecules containing silicon-carbon or boron-carbon bonds, or bicyclobutanes, which contain energy-packed carbon rings. By using bacteria, researchers can potentially make these chemical compounds in "greener" ways that are more economical and produce less toxic waste.

With a goal of promoting "the progress of the mathematical, physical, and natural sciences," the current papal academy was established in 1936 and is comprised of 80 men and women academics from around the world who have made outstanding contributions in their fields of scientific endeavor. The academy's focus is on 6 major areas: Fundamental science; Science and technology of global problems; Science for the problems of the developing world; Scientific policy; Bioethics and Epistemology.