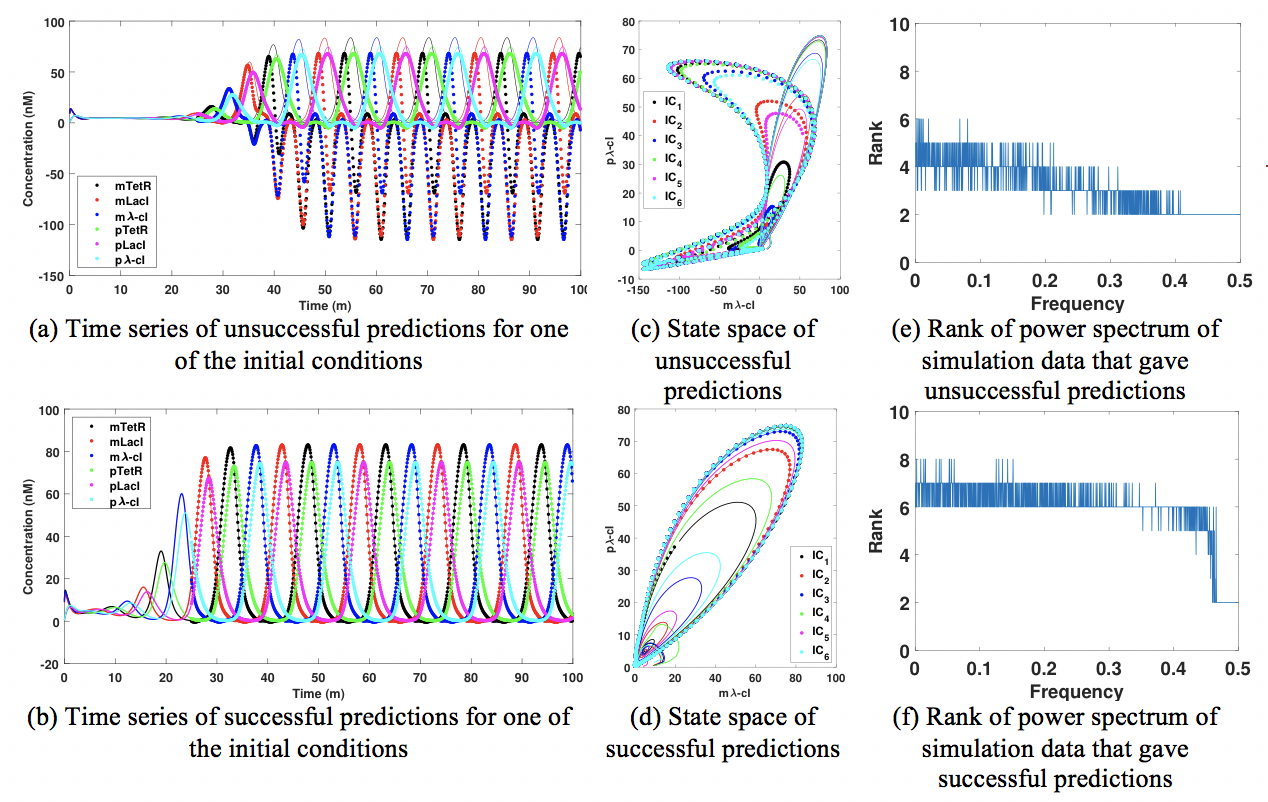 Simulation data (dashed) plotted against predictions (dotted) obtained using the model identified through EDMD. In the figures (a) and (b), we can see the difference between successful and unsuccessful predictions quantified a concentration of the species and the same difference is depicted graphically as trajectories in state-space in (c) and (d). We can see the difference in the power spectrum ranks as predicted by our prescribed PE conditions manifesting as a rank deficiency in (e) which is unlike (f) where the rank is consistent throughout.

This project seeks to develop an experimental framework for discovering the high-dimensional operational envelope that a given genetic circuit of E. coli possesses. From this, we can gain a greater understanding of how the performance of a genetic part varies as a function of the stresses that a bacterium endures and use this insight to redesign operationally robust versions these genetic parts within a defined three dimensional or planar biomaterial scaffold. For our upcoming characterizations in the subsequent year, we aim to be examining the performance of genetic circuits in sodium alginate-based hydrogels.  The idea is to probe the robustness of genetic circuits in hydrogel scaffolds that can be deployed in adverse conditions, with a defined operational envelope that will guarantee bioengineered performance of biosensors and biocomputing devices.

In addition we seek to develop algorithms which aid design of experiments by optimal utilization of automation to maximize knowledge gained about the underlying system. Knowledge about the underlying system can come in the form of models of varying sophistication depending on the experimental observations. While data-driven modeling is an extensively researched topic with a wide range of algorithms and tools available for linear systems, numerous systems of biological importance are nonlinear where identification techniques can be ad hoc. Nonlinear systems demonstrate characteristic long-term regularities like a stable limit cycle with a characteristic frequency (e.g. glycolytic oscillator, repressilator, circadian clock, etc.) or multiple stable fixed points (e.g. toggle switch, bacterial growth, etc.) that can be exploited for a wealth of synthetic biology applications. Though machine learning has shown broad scope in predicting behavior of nonlinear systems, we seek a model which often remains a black box in machine learning. For this reason, we use the Dynamic Mode Decomposition (DMD) algorithms for their ability to represent interactions amongst states and proven connections to the rigorous Koopman representation of dynamical systems.